When we think of Valentine’s Day, we think of cards, flowers, and chocolates. We think of girlfriends celebrating being single together and couples celebrating their relationship. We think of all things pink and red taking over every pharmacy and grocery store imaginable. But what Dr. Quas, Dr. Wiater and Dr. Kang and our team would like to think of is when and how this joyous, love-filled day began.

Several martyrs’ stories are associated with the origins of Valentine’s Day. One of the most widely known suggests that Valentine was a Roman priest who went against the law at a time when marriage had been banned for young men. He continued to perform marriage ceremonies for young lovers in secret and when he was discovered, he was sentenced to death.

Another tale claims that Valentine was killed for helping Christians escape from Roman prisons. Yet another says that Valentine himself sent the first valentine when he fell in love with a girl and sent her a letter and signed it, “From your Valentine.”

Other claims suggest that it all began when Geoffrey Chaucer, an Englishman often referred to as the father of English literature, wrote a poem that was the first to connect St. Valentine to romance. From there, it evolved into a day when lovers would express their feelings for each other. Cue the flowers, sweets, and cards!

Regardless of where the holiday came from, these stories all have one thing in common: They celebrate the love we are capable of as human beings. And though that’s largely in a romantic spirit these days, it doesn’t have to be. You could celebrate love for a sister, a friend, a parent, even a pet.

We hope all our patients know how much we love them! Wishing you all a very happy Valentine’s Day from the team at The Brace Place! 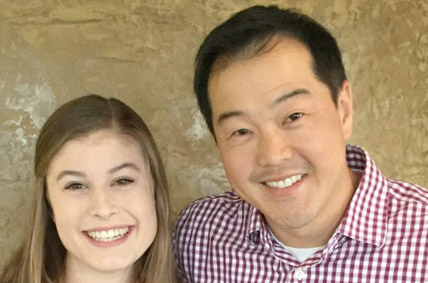 “I just really appreciate everyone here and the kindness you've shown to our girls. I know their parents would be so happy to know they get such great care. The doctors always go way out of their way to help us every time.”~ Allison

“We just love it here! The honesty is great. I love that we don't feel taken advantage of, which unfortunately we have been elsewhere. You have a great staff and we think the best of you! Keep up the good work. The doctors are always wonderful and never rushed, which I love!”~ The Goff Fmamily

“I may not have been to other orthodontists, but from what I hear from my friends and family, The Brace Place seems the best. Every time you walk in you are greeted with a smile, shich always starts your day off right. Couldn't ask for a better staff!”~ Diane E.